Health Blog | About Us

While not the food you would see listed as ultimate health food, the fried green tomatoes are instead a combination of healthy and not so healthy.

This restaurant, located on the Gulf Coast of Florida, has been featured on the Diners, Drive-ins, and Dives show which features Guy Fieri as the host.

A framed and autographed picture appears on the wall at this diner. The spray painted logo of Guy Fieri also appears on a different wall in the restaurant.

These are most likely the ribs eaten by Guy Fieri

The fried green tomatoes were good, but nothing ground-breaking in the way of part-healthy food. The pulled pork and HUGE plate of ribs were the show stealer at this As Seen on TV Restaurant.

After eating just a portion of these ribs it is time to hit the treadmill and run a 12K marathon, while doing jumping jacks. 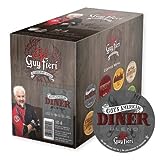 Guy Fieri Flavortown Roast Line up ne thing you know about a diner is that they've got a great cup o' joe...so here you go! Compatible with Keurig® original K-Cup® coffeemakers. Keurig® and K-Cup® are registered trademarks of Keurig, Inc. Neither Single Cup Coffee Ltd. nor Guy FieriTM Flavortown Roast are affiliated in any way with Keurig, Inc. 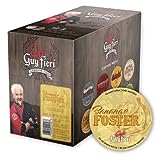 Guy Fieri Flavortown Roast Line up Sweet banana, caramelized sugar and cinnamon flavors -- brings me back to my days as a flambé captain! Compatible with Keurig® original K-Cup® coffeemakers. Keurig® and K-Cup® are registered trademarks of Keurig, Inc. Neither Single Cup Coffee Ltd. nor Guy FieriTM Flavortown Roast are affiliated in any way with Keurig, Inc. Really strange flavors of coffee for the Keurig.

Filmed during a double batch of falafel cooking.

Brand new to Publix – Plant Based BBQ Pork. This package will make about two …

Fresh cooked broccoli with steam coming off of the broccoli tops. Animated gif of real …

No Evil Foods Chicken at Publix

New vegan chicken at Publix – No Evil Foods. Comrad Chicken. Found next to the …

Publix Has Beyond Beef – In the Frozen Section!

Finally found Beyond Beef in Publix, Florida. Located in frozen section, next to the other …